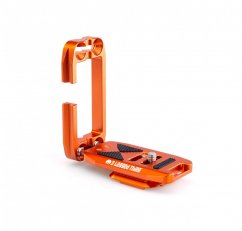 Ellie is a new evolution of universal L-Bracket, bringing users increased compatibility with a wider range of cameras, and advanced functionality. L-Brackets are primarily used to switch from landscape to portrait on a tripod whilst maintaining the focal plane and horizon. Ellie PD Short is specifically designed to work with Peak Design´s Capture Clip system*. It features a standard Arca Swiss compatible footing that clips securely into the Capture. It has a shorter 70mm base plate which is designed to give access to the battery door on smaller DLSR and mirrorless cameras from Fujifilm, Olympus, and Canon. Compatible with standard Arca-Swiss clamps, Ellie features two different 2 screw mount slots in the base. This allows users to position the L-Bracket in the optimal position for their camera. The length of the bracket base can be adjusted thanks to two rigid stainless steel sliding bars which are then fixed into position by the user with the supplied tool. The rear edge of the base is sloped to better enable screen access. Ellie’s vertical aspect has an opening in one side, allowing users with L-shaped cable pins to connect accessories. This opening can be placed in one of four positions by inverting or reversing the vertical aspect.