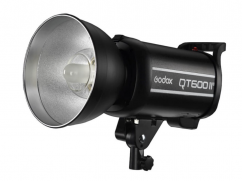 Studio flash Godox QT600IIM. Godox QT series are professional studio flashes with a compact and durable construction and almost unlimited possibilities. Power regulation from 1/128 to 1/1, very short recycle time, 150W modeling light has a proportional mode to allow you to preview your lighting effects and a percentage mode that adjusts brightness from 5 to 100%. or just turn off. Strobe flash, HSS, Stable Color Temperature mode, built-in System X receiver completes the huge functionality of the lamp. Godox QT series are available in several power versions up to 1200Ws, they are characterized by a range of flash energy regulation in the range of 7 degrees of aperture (1/1 - 1/128, with an accuracy of 0.1 EV). Recycle time to full flash energy in less than 0.9 seconds. At minimal power, it achieves a very short flash duration of only 1 / 28984s, which allows free shooting during sessions. The flash color temperature is 5600K and may fluctuate within ± 200K depending on the flash energy set. We have several lamp modes at our disposal, of which the Stable Color Temperature deserves attention. Built-in System X receiver enables remote flash firing (until X-Sync), flash energy control and many more. In addition, Godox QT series is equipped with a USB connector that allows you to connect receivers of the XT16, FT-16 or X1 TTL system. It is also possible to use the 3.5 mm Jack socket and connect the lamp with triggers of other brands. Back panel of the lamp is simple and functional. The LCD screen showing the lamp settings is also easy to read from a large angle. Next to it is a handy knob for adjusting the flash output, changing the radio communication channel and the group of lamps. Placed under the LCD screen a series of five buttons gives quick access to all settings and functions of the lamp. The 150 W halogen pilot light can operate independently of the flash output (brightness can be set manually), or be coupled with flash energy (proportional). In addition, it can be turned off automatically for a flash